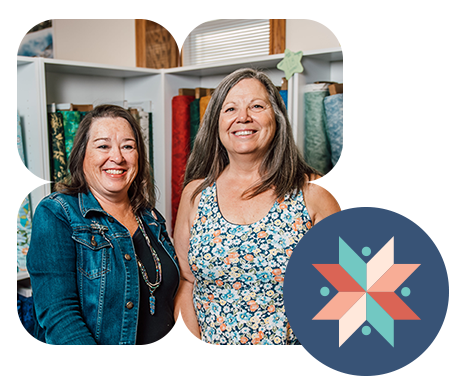 Here to provide you with exceptional training, machines, supplies and finishing services to make your treasured quilting and embroidery creations come alive!

Stop by and see us today!

First there were Donna and Glenn -

Donna Bristow, Nurse Practitioner, Healthcare Software and owner of Montana Longarm Quilting and Supplies has been involved in the quilting community in Helena, MT for over 30 years. In the beginning it was all machine piecing and hand quilting but she quickly learned that she couldn’t keep up by hand quilting so progressed to quilting on her domestic machine using a walking foot. She then became a master at e-stippling on the same domestic machine. After eventually taking a class and renting time on a hand-guided machine she moved on to longarm quilting free motion designs.

In 2010 Donna and her husband Glenn opened Prickly Pear Quilts downtown Helena on the walking mall. They had a hand-guided, stitch-regulated longarm on the lower level on which Donna did training classes and then rented it out to the area quilters. They enjoyed the clientele and the many tourists that came through that location. After a year and a half they decided to go another direction and sold the shop to Connie Roope who has continued to nurture and grow the business to the point where they outgrew the quaint space downtown and moved to the busy intersection of Montana Ave and Cedar St.

In late 2015 Donna was visiting Olde City Quilts in Burlington, New Jersey, a shop owned by her college roommate and husband, Judy and Rob Engime. While there she discovered what an “Innova” was and fell in love with an AutoPilot longarm computerized quilting system. She knew then that she needed to have one at her home so returned home and completed some remodeling to create a quilting studio where “Buffy, the Quilt Top Slayer” could reside. Buffy moved in during the spring of 2016 and Donna immediately started working on the many UFOs (unfinished objects) she had stacked up waiting to be completed. This allowed her time to improve her skills on Buffy to the point where she eventually was able to launch her home-based longarm quilting business “Montana Quilting and Supplies” and she started longarm quilting for her many friends.

In early 2018 Donna and Glenn decided it was time to open another store – this time focusing exclusively on longarm quilting services. They learned that the Innova Dealership for Montana was becoming available and quickly accepted the challenge to open a longarm training center in Helena which they have named “Montana Longarm Quilting and Supplies”. Continuing the many years of being entrepreneurs they opened the training center mid-August. The focus is exclusively on longarm quilting with sales, training, rentals and professional quilting services on Innova longarm quilting machines (both hand-guided and computerized) along with longarm technique classes and the many supplies needed to support this endeavor including batting, wide backs, longarm threads and  other notions and accessories. Donna and Glenn attended the Innova Technician training in New York and are very excited to support all the Innova owners in Montana! In the fall of 2020 (yes, during a pandemic!) they added Brother sewing and embroidery machines - and the rest is history!

Then came Julie and Wes…

Julie Dess, general manager and Godmother of Montana Longarm Quilting and Supplies has been quilting for over 40 years. After 13 years of working with first Sue Yanone and then Jenny as the manager of The Sewing Palace in Helena, she is excited to focus on the longarm aspect of the quilting business She is also a previous quilt shop owner (Scraps of Heaven) and a teacher at heart. She has been teaching others how to quilt in Helena and the surrounding areas for over 30 years. She loves to challenge her students to explore the possibilities and is known to think outside the pattern leading to more creativity than the student ever considered possible. Julie and her husband Wes are also proud owners of Lone Pine Hollow, a retreat house and wedding venue in the Birdseye area outside of Helena. Wes has agreed to join MLQS as well, assisting Glenn part-time with the Technician side of the business. 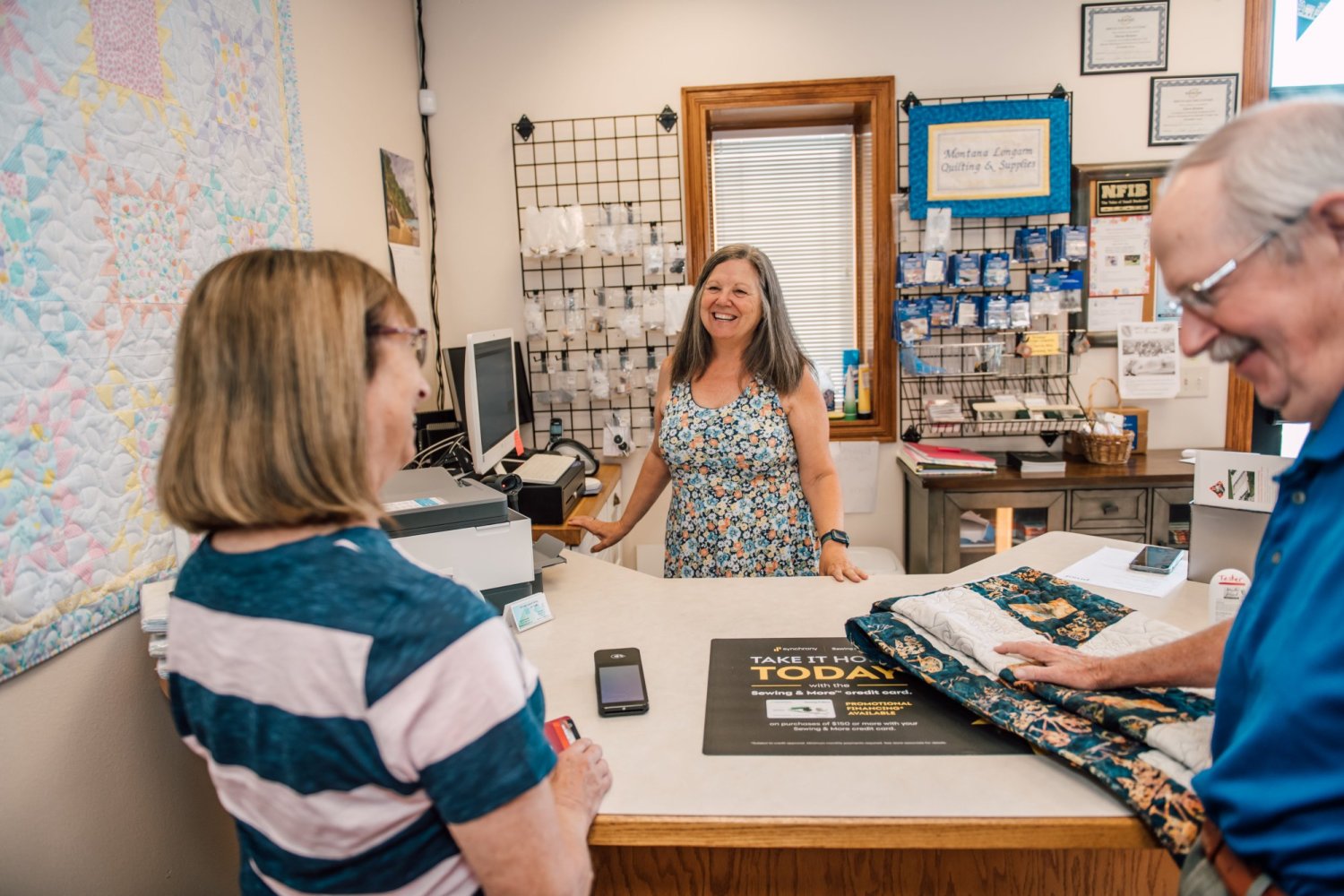 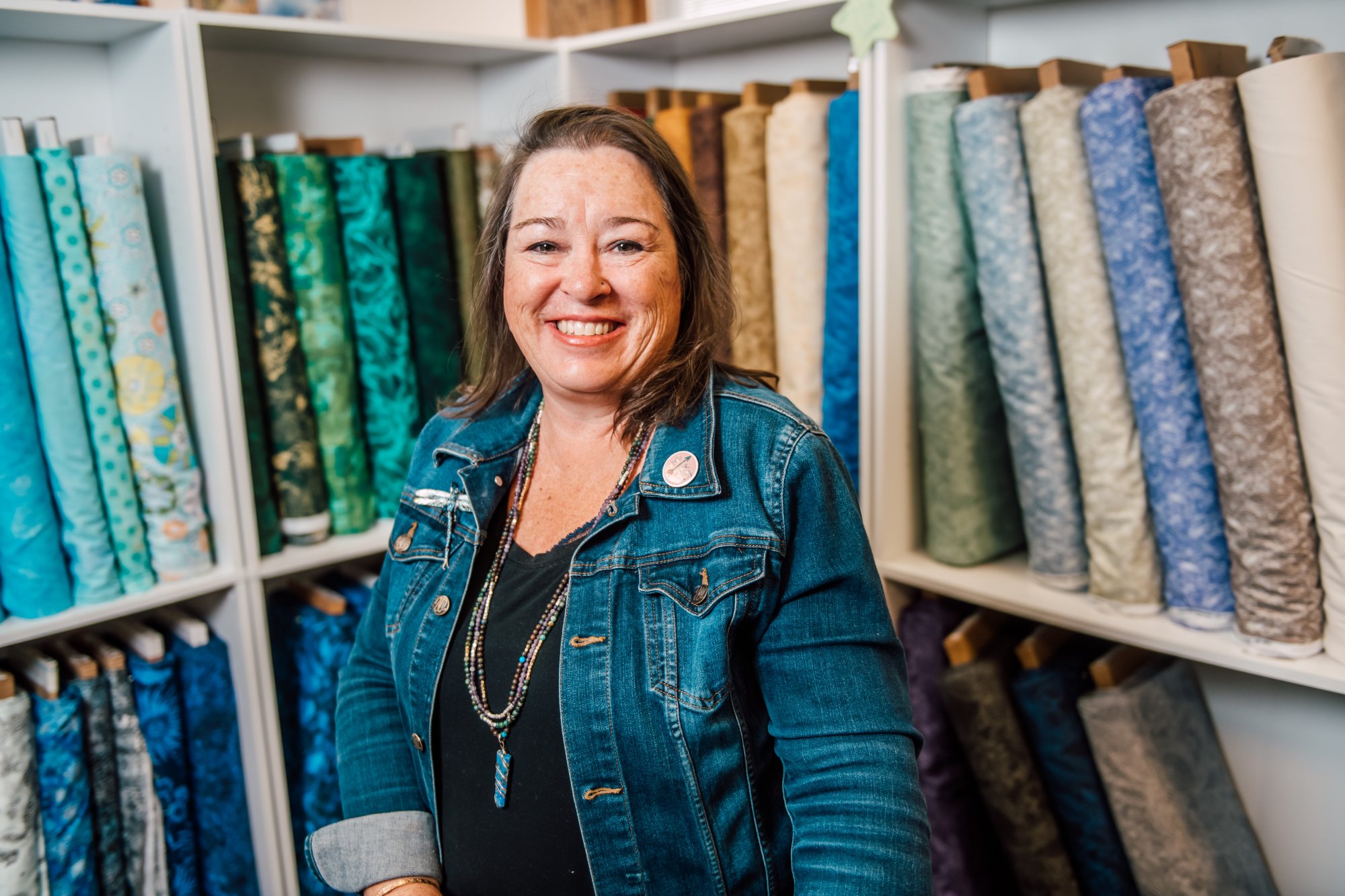 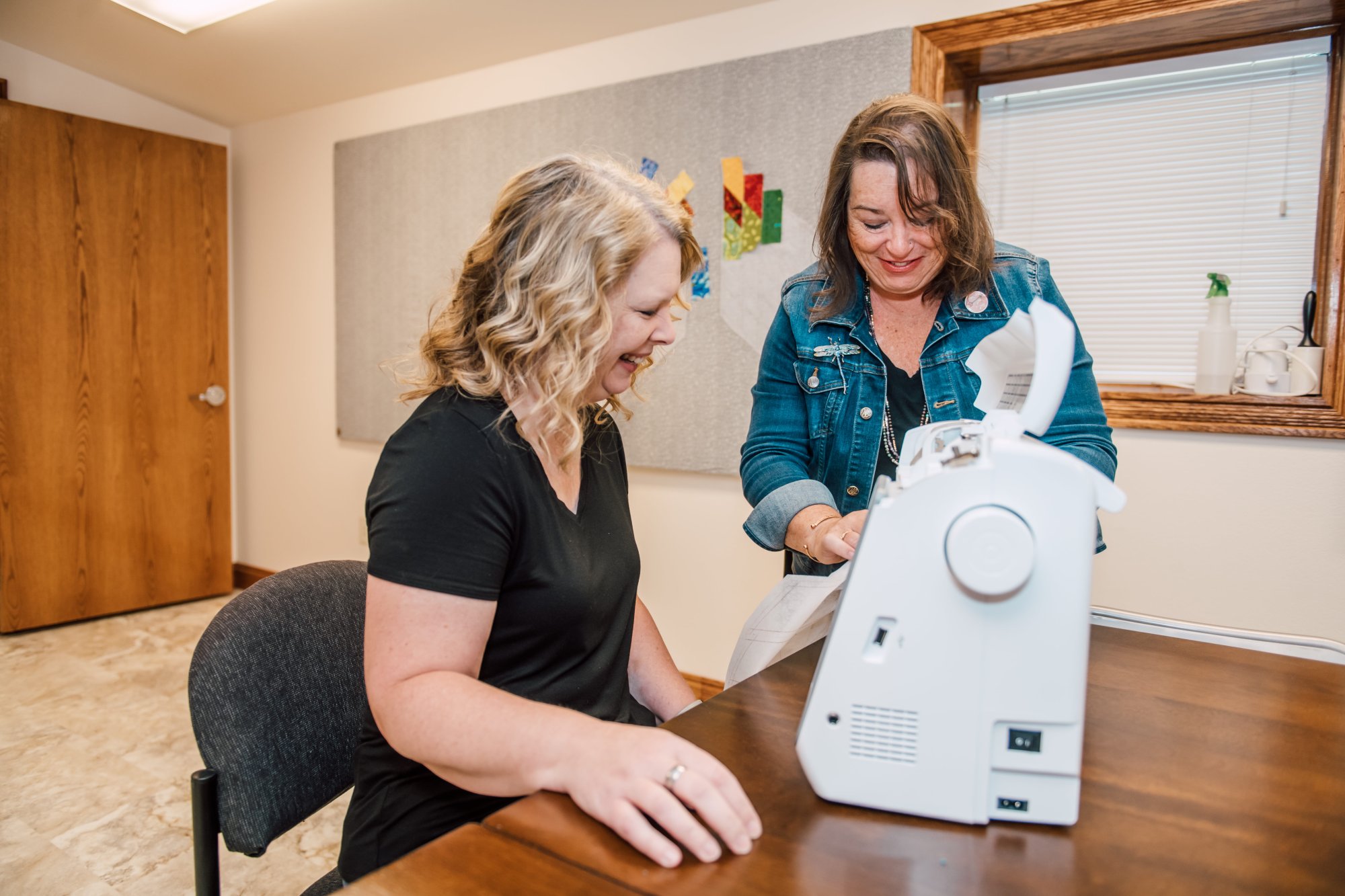 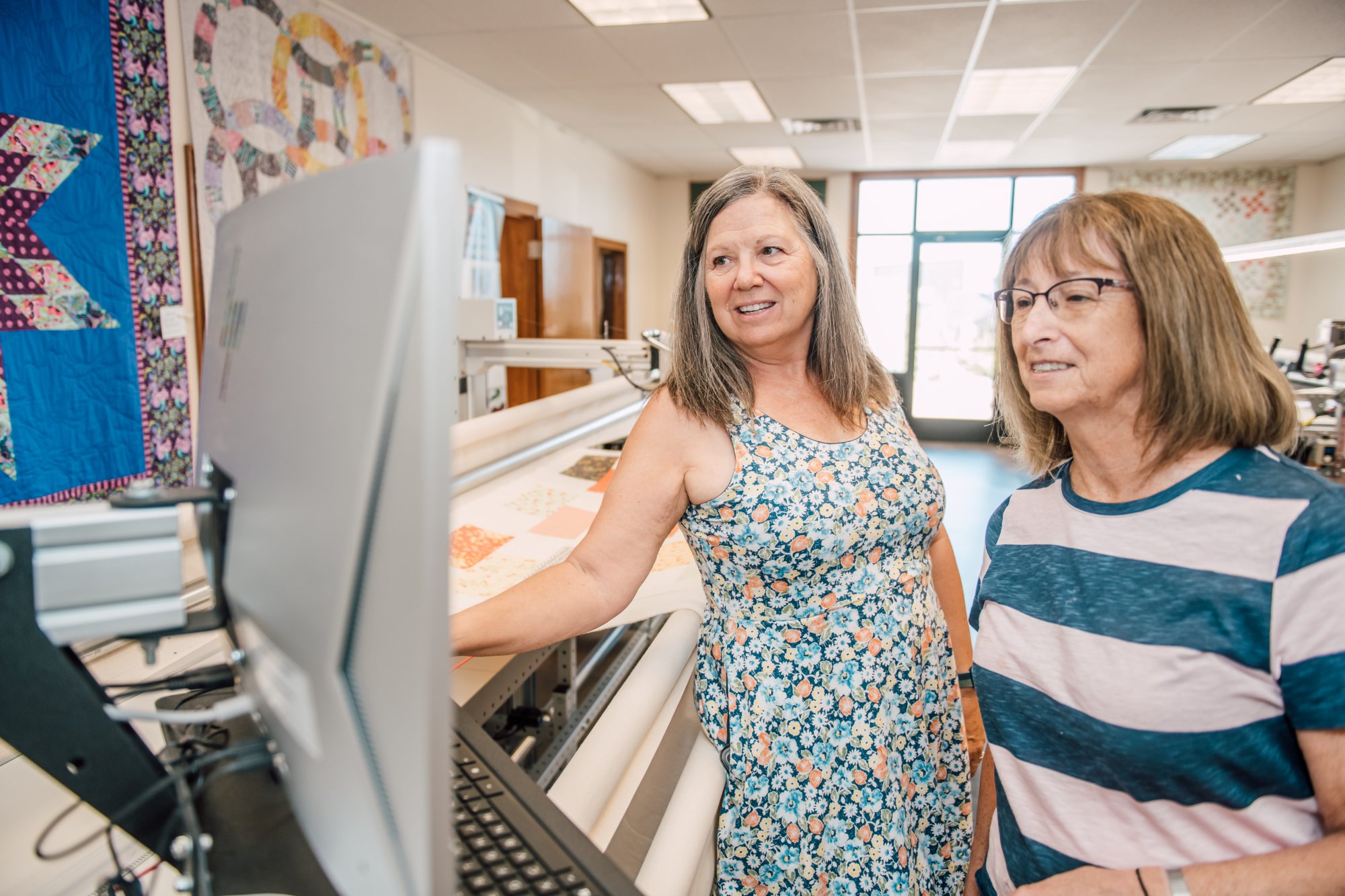 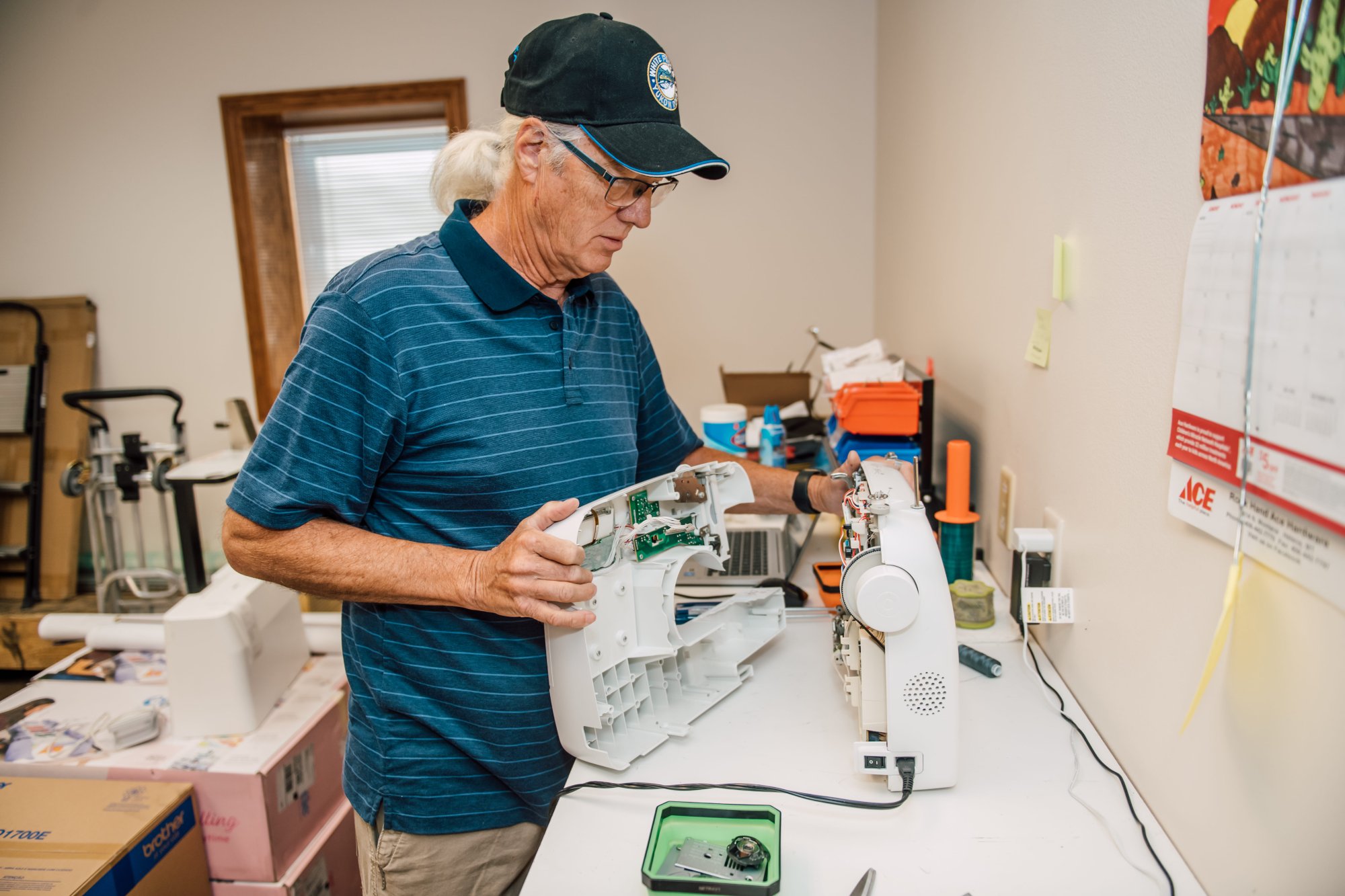